In the movie Jerry McGuire, the main character reminds us that we live in a cynical world. Cynical is defined as believing that people are motivated by self-interest; distrustful of human sincerity or integrity. 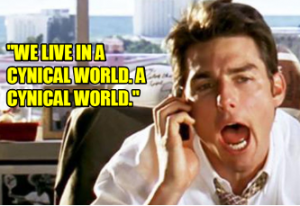 You can believe that we live in a cynical world if you like, but there was nothing cynical at Manhattan airport in Kansas last Wednesday night. After a full day of training at a school district, Kevin and I were returning to the Twin Cities. Informed that our connecting flight to Dallas would be delayed five hours, we knew we would miss our flight from Dallas to Minneapolis.

That’s when we entered a non-cynical world. The man at the ticket counter quickly arranged for us to get on a morning flight from Dallas to the Twin Cities while also providing us with a motel in Dallas where we could spend the night. The Kansas State student working at the food center stayed overtime to provide us and other travelers with sandwiches and drinks. Then Joe showed up.

As we sat down for our late-night snack, Joe sat at the table next to us. We learned that Joe was a soldier of 16 years who had come to Fort Riley from an army base in Indiana to train members of the National Guard. We told Joe we were hoping to watch the play-off baseball game while we were delayed. The channel on the airport TV couldn’t be changed to the game so Joe accessed the game on his phone and then handed it to me. When we arrived in Dallas at midnight, Joe arranged for a shuttle to our motel. He also aided a woman traveling alone who needed to get to a different motel. When we returned to the airport early the next morning, Joe made sure we got to the right gate on time.

Motivated by self-interest? Didn’t see an ounce of that in Joe. He went out of his way several times to help people who were complete strangers to him.

I felt a bit of sadness as Joe boarded his flight to Indianapolis and we boarded our flight to the Twin Cities. It’s unlikely that we will never see Joe again, but he came into our lives for a reason…to remind us that we live in a wonderful world.

Yes, that might not always be the case, but let’s not get out of balance by believing that we live in a cynical world.