In baseball, ground rules are special rules particular to each baseball park in which the game is played. For example, when a fair ball lodges in the ivy covered outfield wall at Wrigley Field, home of the Chicago Cubs, the fielder throws up his hands and the batter is automatically awarded two bases. 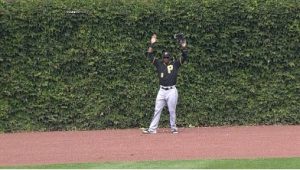 Because this rule is understood by all participants, the game continues without teams arguing about what should happen each time balls get stuck in the ivy.

Ground rules are guidelines that participants agree to follow in order to make human interaction more productive and enjoyable. These can be useful in our homes, schools, or other places or situations where people congregate. For example, a ground rule at my daughter Megan’s home is that people take off their shoes when they enter the house.

During a recent conversation with a supervisor, he expressed frustration with team members during meetings. He felt they were being disrespectful when they were doing things on their computers that had nothing to do with the purpose of the meeting. Hearing this, I immediately thought of ground rules. I asked the supervisor if expecting participants to only use their computers for meeting purposes had been expressed. His response, “No.”

This led us to a conversation about the need for establishing ground rules. Roger Schwartz, organizational psychologist, says, “Having rules in place that you consistently enforce can significantly improve how your team solves problems and makes decisions.”

Daniel Wirtz, co-founder of Facilitator School, suggests that establishing ground rules can be especially helpful when we are trying to:

One ground rule Wirtz offers to increase engagement is “Be present, or be elsewhere.” When participants are not engaged, the quality of the meeting and its output diminishes. People often do this unconsciously because they feel that the meeting isn’t relevant to them. “Be present, or be elsewhere” is a good meeting guideline to establish shared awareness and participation.

From our Top 20 team…Willow, Kevin, and Tom…who know when to throw up their hands.