Shirzad Chamine, who has helped us identify the ten saboteurs listed below, is essentially asking us, “Who do you listen to?”

These saboteurs have a voice. When they speak to us, they try to convince us through their lies that they are working for us and not against us. If we listen to them, they will prevent us from experiencing more effectiveness, happiness, and success.

However, over time, we can quiet our saboteurs by taking three simple steps:

Name It: Identify our saboteurs by name.

“My Pleaser saboteur has just shown up.”

“My Avoider saboteur is trying to get my attention.”

Claim It: Take responsibility for your saboteurs. Don’t blame anyone for them. Accept them as your own inner voice.

Tame It: Know that you have control over your thought life. Tell your saboteur to be quiet. Let it know that you are not going to listen to it. Make a specific choice to counter what it wants you to do.

Nelson Mandela offers us a powerful example of listening to and then quieting saboteurs. Mandela said:

“Before I went to jail, I was active in politics as a member of South Africa’s leading organization and I was generally busy from 7 A.M. until midnight. I never had time to sit and think. As I worked, physical and mental fatigue set in and I was unable to operate to the maximum of my intellectual ability. But in a single cell in prison, I had time to think. I had a clear view of my past and present, and I found that my past left much to be desired, both in regard to my relations with other humans and in developing personal worth.” 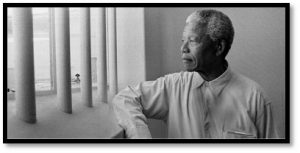 While in a single cell in prison, Mandela named, claimed and tamed his Restless saboteur. This resulted in Mandela experiencing a major realization. 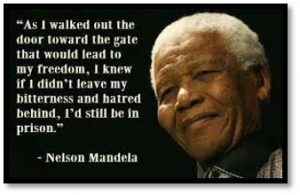 By quieting his Restless and Judge saboteurs, Mandela responded differently. On the day that he was inaugurated as President of South Africa, he invited the man who had kept him in prison for 27 years to be on the stage with him. That is not a decision that a saboteur would have made. In fact, his Judge saboteur would have argued to put this man in prison for 27 years. But by quieting his own saboteurs, Mandela was able to lead his nation in a more peaceful and effective way.

After learning about saboteurs during a presentation last week, Vanessa sent a humorous-yet-serious explanation of her saboteurs to me: “I am a restless, hyper-vigilant, judgmental, stickler who aims to please by hyper-achieving!! No wonder I’m so tired…I’m like a semi-professional saboteur!!!!!!”

Vanessa has named and claimed her saboteurs. Here’s hoping she can tame them. Imagine what’s in store for her and for ourselves if we can quiet our saboteurs.

From our Top 20 team…Kevin Brennan, Willow Sweeney, and Tom Cody.