In the last few Wellness Wednesdays we have been tracking our beliefs and the conviction or strength of our beliefs: The more we believe something to be true the more real it is for us.

Thus, the more power that belief will have in our life. Julia’s belief that she was going to succeed because she was crazy enough to think that she could, the Wright brothers’ belief that they could fly, Anne Sullivan’s belief that Helen Keller could learn, and Nelson Mandela’s belief that apartheid could be dismantled were all in the strong zone.

That’s where we want positive beliefs to be. But what about strong negative beliefs? What if Julia believed she would never succeed or Anne Sullivan believed it was impossible for Helen to learn? If those negative beliefs were in the strong zone, Julia would not have succeeded and Anne would not have helped Helen learn. Unless the conviction of those beliefs is weakened, they would become roadblocks to success and human development.

While Mary was in college, a professor said to her in a condescending way, “Mary, you should go back to high school and learn how to write.” This message from a college professor initiated a strong belief in Mary that she was not a good writer. This belief continued into her professional life. She dreaded submitting written reports or proposals and would procrastinate whenever she had to do so. Her conviction made writing a painful experience.

How can Mary weaken her strong conviction of a negative belief? She can’t change her conviction from a 9 to a 2, but she can change it from a 9 to a 6. She can ease up by using a process called Name-Claim-Tame.

Name It: Mary needs to identify the belief as a belief. Although her belief that she is not a good writer may seem like a fact to Mary, it’s not a fact. Naming it as a belief rather than a fact is the first step in making a positive change. We can change beliefs; we can’t change facts.

At Top 20 Training, we refer to this as the Dog Poop Rule. If we walked through a park and stepped in dog poop, who would be responsible for the poop? The dog. But once we step in it, who stinks? We do. We can blame the dog all day, but the dog’s not coming back to clean our shoes. It’s now our responsibility to clean it up. 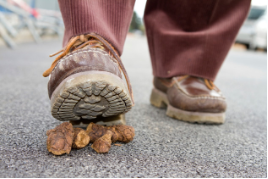 Tame It: By claiming responsibility for her belief, Mary has maintained power to tame it. She can take direct action to weaken its conviction. We’ll consider six ways of doing this in next week’s Wellness Wednesday.

From our team…Kevin Brennan, Willow Sweeney, and Tom Cody…who are role models for me in cleaning their shoes.