Our recent Wellness Wednesdays have focused on the importance of connection in developing mental health and social-emotional well-being. We have considered how sharing my story and helping others are ways to create connection. I recently experienced both within a span of ten minutes.

While attending my grandson Joe’s eighth grade graduation, I listened to his classmate Shilohe Espinoza share with a crowd of over 300 students, parents, and grandparents a significant moment in his life. Here’s what Shilohe had to say: 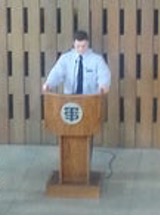 “I have had many different memorable events, but there was one specific event at St. Thomas Academy that changed my life. The event was listening to Sam Martin’s eighth grade speech last year. During Sam’s speech he discussed how he had been struggling with issues with his mental health and how he was able to get help for the issues he was struggling with. I was focused on every word that Sam said because it was the first time that I realized there may be other students that were struggling with similar issues that I was.”

“I know that it may be surprising to people that know me to hear that I have been struggling with severe depression and anxiety for several years, because I work hard every day to keep the symptoms I experience under control. Listening to this speech really helped me to understand that having issues with your mental health is something that many others are dealing with and that I needed to seek some help to work through the issues I was experiencing. I was able to talk with my mother and together we found a doctor that was able to help me understand that many people experience similar issues to what I was experiencing and that it was ok to get help with those issues.” 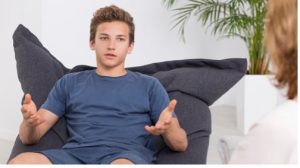 “Since starting treatment for my depression and anxiety, I have been able to get my symptoms under control which has allowed me to be a more successful student at St. Thomas Academy. I hope that by sharing my struggle with my mental health along with opening up about my experience will show other students here that if they are struggling with similar issues, they are not alone, there is help available, and that there is no shame in getting treatment for mental health issues.”

The genuine, heart-felt applause that followed Shilohe’s short speech indicated that his willingness to share his version of my story and his sincere desire to help others created a connection with those who were listening. What Shilohe shared also revealed another powerful way connections are made: vulnerability. Vulnerable comes from a Latin word that means ‘able to be wounded’ or, according to Webster, ‘susceptible to physical or emotional attack or harm’. Shilohe was vulnerable; he was willing to be open about a deeply personal aspect of his life. Although his willingness to do so ran the risk of being humiliated and rejected, it had the opposite effect. Shilohe’s vulnerability activated deep respect in his audience and caused a collective embrace of this young man.

As soon as the graduation ceremony ended, I found Shilohe and thanked him for his courage and powerful message. Then, a few days later, I asked him if I could share his message with others. He, of course, said yes because he wants to help others.

From our team…Willow, Kevin, and Tom…which has been formed through mutual vulnerability.