I did it…and what I did hurt a person I cared about. There were no excuses. There was no one else to blame. It was my choice. The connection with the person I had been close to was severed. I could feel the separation.

As described by Brené Brown, “Connection is the energy that exists between people when they feel seen, heard and valued; when they can give and receive without judgment; and when they derive sustenance and strength from the relationship.”

This connection was gone. Sustenance and strength had become isolation and regret.

Yes, I was sorry for what I had done, but sorrow does not undo the past. Nothing undoes the past. Does that mean we are stuck in the sorrow and separation that a past action has caused? Oftentimes we are. But like a physical wound, with the right balm, healing is possible.

Forgiveness is that right balm…forgiveness of self and forgiveness given by the offended other. 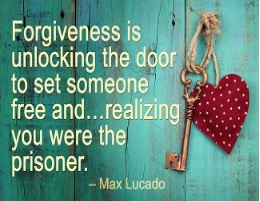 Forgiveness is restorative. Although hurt that we cause or hurt that is done to us can become a roadblock to a desired future, forgiveness allows us to leap frog that roadblock and arrive at a renewed connection. 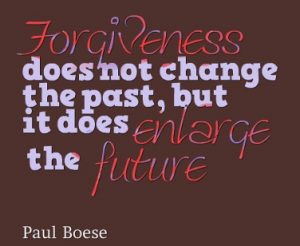 Some hurts that we cause or experience make forgiveness difficult. However, this doesn’t mean forgiveness is not possible. As I am writing this Wellness Wednesday, I am recalling America’s enemies in World War II…Germany, Japan, and Italy. Over the course of time, these enemies have become allies. The past is not denied or forgotten, but it is not allowed to determine our future.

Consider how forgiveness, of yourself and others, can lead you down the path to physical, emotional, or spiritual well-being and to a more desirable future.